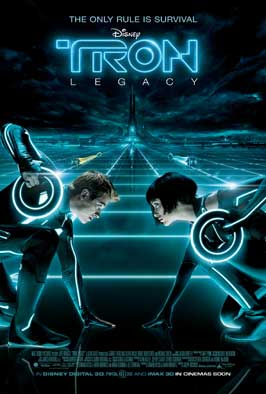 I originally wrote this review a couple years ago for In the Mouth of Dorkness.  This has definitely become one of my comfort movies over the years.

The first ten or fifteen minutes of the “Tron Legacy” are designed to quickly get you from where the first film ended, up to speed with where this new film’s story begins.  It’s fast paced and packed with a bunch of exposition that isn’t too weighted down with character names or extraneous info.  Basically, Kevin Flynn had a kid, his wife died (this is a Disney film, after all), he got really weird and started talking about lots of crazy stuff, then he disappeared.  Years later, his son Sam is something of a trouble making recluse.  Kevin’s old partner Alan is only nominally involved in their Microsoft/Apple type tech company, and everyone is living in the shadow of Kevin Flynn.  It also features the most wonky bit of CG in the film, which is made worse by the scene not being totally necessary.  CG ‘younger Flynn’ looks awful.  When you see him again on the Grid, it works because it’s supposed to be a digital representation.  But when he’s in the real world and talking to his kid, it just looks creepy and weird.  Combined with Sam’s rebel without a cause attitude, the wonky effects made me wary.  30 years of waiting for a sequel was starting to look a bit like Star Wars all over again.  But after these problems, things improve dramatically.

A mysterious message leads Sam to his dad’s old arcade where he gets himself shot onto the Grid.  The original film created a fantasy world, this film builds on some concepts and takes it to whole new places.  This isn’t the same world we saw in the original film.  It’s a new Grid that has been left to its own devices, without outside input for 20 years.  Cities, arenas, badlands, and more.  It’s gorgeously designed and flawlessly executed.  The images remind me of book covers from classic science fiction novels.  Dramatic black buildings with intense lines of light, alien landscapes and unusual vehicles.  It looks amazing.  After a run-in with the authorities in this digital world, Sam is rescued by a Jules Verne loving program, the adorable and knowledge-hungry Quorra.  And through her, he finally comes face to face with his father.  The distance between the two remains, and each struggles with their past, with the crisis at hand, and with world views.

“Every idea Man has ever had about the universe up for grabs.  Bio-digital Jazz, man.”

While the villain of this piece is ostensibly a computer program gone mad, Clu isn’t evil.  He’s a reflection of Kevin Flynn’s own quest for perfection in a world of chaos.  With the help of Quorra and Sam, Kevin comes to understand that chaos is an essential element, that perfection is a trap.  But Clu is incapable of accepting that.  There is a tendency in people to compartmentalize.  The physical or intellectual.  The visceral or the ethereal.  Science or art.  Good or evil.  Emotion or logic.  But that’s not what life is.  It’s synthesis, not antithesis.  One can strive for perfection while embracing imperfection, just as one can be logical and passionate.  Too often we’re trapped in a post-Zoroastrian dualism that dictates an either/or situation in all things, and this infects the general zeitgeist of our culture.  Where I see it most often is in the spiritual person asking how one can feel awe or wonder in science.  But there’s more poetry in a sunrise or a nebula than in all the sacred texts of all the religions that have ever been.  And that’s what this movie is striving for; a vision of a world where order and chaos, light and dark, logic and emotion blend and fuse.  Not a conflict between body and mind, but like the moral of Metropolis, both brought together by the heart.  Even the final conflict isn’t about crushing an enemy, or destroying a monster, it’s about coming together, blending, and rebirth.

“The Old Man’s gonna knock on the sky.  Listen to the sound.”

I would be remiss in my duty if I didn’t mention the kickass electronica score by Euro-club favorites Daft Punk.  I am curious to hear what they might do with other movies in the future, though I don’t know if that’s something they will pursue.  Director Joseph Kosinski certainly has an eye for stunning visuals, and the taste to skip the annoying shaky-cam syndrome that has so affected Hollywood for the last decade or so.  Jeff Bridges and Bruce Boxleitner return, Boxleitner as a sort of catalytic conscience for young Sam, and Bridges as the Yoda-like digital deity trying to reconnect with his son and save the potential of his creation.  And the wide-eyed, wonderstruck Olivia Wilde plays Quorra, the program with a game-changing secret.  I especially enjoy Wilde in her role.  It’s actually one of the better roles for women I’ve seen in recent films; curious, pro-active, self-sacrificing, and heroic, without being shrill, overly deferential, or faux-tough.  Garrett Hedlund is a serviceable pretty-boy lead, not especially interesting or charismatic, but not off-putting, either.

“We’re always on the same team.”

Clearly, I do not have my finger on the pulse of a nation.  I frequently enjoy movies that are either hated or ignored by the general viewing public (“Cloud Atlas,” “Robot & Frank,” “Hanna,” “Moon,” “Watchmen,” “Hulk,” etc.).  This is no different.  It’s not even that people don’t like “Tron Legacy,” it’s that nobody cared enough to see it.  “Tron” was something of a cult favorite, which hardly lit the box office on fire.  But I had high hopes this new film would capture attention.  It’s slickly made, a story well told, and very entertaining.  However, it hasn’t achieved much success that I’ve seen.  And three years later (now seven), I think I’m the only one talking about it.  Alas.  If nobody else out there will get on board, I’m still going to sing its praises.  And if you haven’t seen it, I would recommend it.  While seeing “Tron” isn’t a bad idea, you don’t need to in order to enjoy this film.

“We were jamming, man.  Building Utopia.”

You can follow me on Twitter or on Facebook for more jabber about movies, books, science, and more.  Or check out my fiction on Amazon and Patreon.  And for some shorter movie reviews, check out my Letterboxd page.