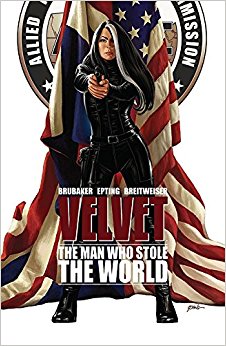 The third and final volume of the Velvet series, ‘The Man Who Stole the World’ is a fitting and satisfying conclusion to this Cold War thriller.  Ed Brubaker and Steve Epting, along with colorist Elizabeth Breitweiser, have (re-)created an awesome world of double and triple crosses.  This works on par with the best of the Bond films.  In fact, I’d love to see it adapted into a live action film.  After finishing it, I think it could be very, very cool.

With this volume(you can read my reviews of volume 1 and volume 2, as well), we get to the bottom of the great mystery, learn a lot of the whys and wherefores of Velvet’s past and her present predicament. I love that it’s a mystery that goes back to World War II, and runs to the highest halls of power in 1970s America.

Some good twists, a few red herrings, some action, and a lot of bodies, Velvet makes for one of the most enjoyable comic reads I’ve had in awhile.  Brubaker remains one of the best writers in the medium, and I recommend him to anyone.  He serves as a strong reminder that there’s more to comics than mutants and capes.

Check out more of my unsolicited opinions on Twitter or Facebook.  And take a look at my fiction on Amazon or Patreon.  I also keep a Goodreads account.