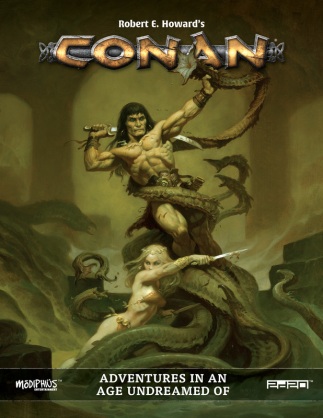 When I saw that a major, serous take on a Conan roleplaying game was in the works, I knew I had to get in on it.  So, I backed the Kickstarter, and I waited.  The end product is a well made and interesting book.  Though, I’m likely to only use it as a resource, and not as is.

If you’ve read any of my previous writings on RPGs, you’ll know that I’m not a big fan of so called ‘crunchy’ game mechanics.  For me, the less moving pieces the better.  This game uses Modiphius’s 2d20 system, which seems fine.  But it’s definitely more numbers heavy than I’m usually up for.  In fact, a good deal of this book is devoted to game mechanics of one sort or another.  Skills, magic, combat, the usual.  I’d have to actually sit down and play or run the game before I could speak to how well they work.  I’ll leave that to reviewers who have more of an interest in rules.

What I really like about the game, and honestly, what I bought it for, is the rich world description.  In the voices of various ‘in world’ characters, parts of the world are explored and explained.  There’s plenty of description to give you a sense of what the Hyborian world is like, and what goes on in it.

The writers have tried to trim a lot of the fat off Conan’s world.  Going back to Robert E. Howard’s original work, and forsaking the comics and novels that came later, they try to build a sense of the world as he envisioned it.  I think it was largely successful.  And it definitely makes me want to run a game.  I’d almost definitely use a different game mechanic, one that fits my style more (Barbarians of Lemuria, likely).

The art is nice, and the whole book is in full color.  There’s an adventure in the back that looks pretty good.  There are also a bunch of pre-made characters (input from backers of the project) that should give folks an idea of what sort of people get into trouble in this world.  It’s a generally well made product, made by people who really love the world of Conan.  This book should definitely serve me well in the future, if I’m ever able to get a game set in Hyboria together.  It’s more comprehensive than the old GURPS book, and is more Howard focused than some previous games.  If you’re a Conan fan, I think you’ll be happy with it.

Check out my Facebook or Twitter.  And take a look at my Patreon page, where I’m developing a tabletop RPG setting. You can also read my fiction over on Amazon.