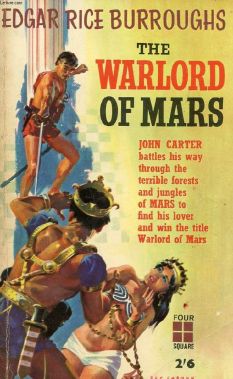 I’ve been reading Edgar Rice Burroughs books since I was a very young kid, and they’ve always held a special place in my heart.  But like most things I do, I kinda half-assed my way around his body of work.  I’ve read A Princess of Mars several times, and The Gods of Mars more than once.  But I don’t think I ever made it to The Warlord of Mars, until now.  I’m pretty sure I know why I never made it to the third of the ten Mars books.  The Gods of Mars isn’t very good.  Re-reading it a year or so ago, I had a devil of a time getting through it.  Sure, there are some cool, crazy ideas, and some great Burroughs moments.  But it’s definitely not Burroughs in top form.  Reading The Warlord of Mars, however, was like coming home.  This was the pulp adventure I was craving.

In this book, we find John Carter once again trying to find Dejah Thoris, his continually kidnapped wife.  To that end, he flies to the North to find the legendary Yellow Men.  There are monsters, an ice wall, super science, a rogue prince, new villains and new allies.  And there’s plenty of sword swinging, high-jumping, super-strength filled action.  Unlike in The Gods of Mars, the pace is relentless, and the book flies headlong toward its conclusion.

The nature of Burroughs writing means that it isn’t always very high-minded or proper.  There are a few moments where his use of tense feels off, and there are some grammatically rough patches.  But that’s almost a charm of its own.  It’s almost ‘conversational.’  What is less charming is the racism and the sexism.  They’re not unexpected.  He was writing in the early 20th century, and Burroughs was very much a man of his time.  He definitely gives the impression that he is pushing a ‘separate but equal’ idea, as on Mars, his different colored races seem to be able to get along, so long as each remembers his place, coming to his fellow’s aid, but then quickly returning to wherever they traditionally call home.  Ugh.  But I’m sure people far more scholarly than I can shed more light into psychology and racism.  As a casual observer, though, I couldn’t help but cringe on occasion.  I read a lot of old Science Fiction and I watch a lot of old movies, so it’s not a reaction I’m unfamiliar with.

Whatever his literary merits might be, Edgar Rice Burroughs wrote some memorable and fun adventure stories.  He was a major early influence and inspiration for me (and countless other writers and filmmakers).  And he will always hold a special place in my pantheon of writing gods.  If you haven’t read him, do yourself a favor and grab something from him.  You may not learn great truths about the human condition, but you’ll have a great afternoon, dreaming of swords and monsters.

Check out my Facebook or Twitter.  And take a look at my Patreon page, where I’m working on a novel and developing a tabletop RPG setting. You can also read my fiction over on Amazon.