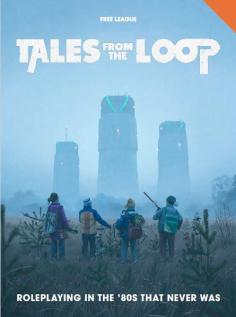 Nostalgia is a dangerous game, and one I think has been played poorly a lot in recent years.  The way a lot of older people look back on the 50s as some kind of wonderful utopia of warm memories and joy, a lot of people who grew up in the 80s like to look back on their youth.  And they’ve got money for movie tickets, video games, and comic books. So there’s been a lot catering to this attempt to recover the never was past. Sometimes, it’s done well. Sometimes it’s done very poorly indeed.  Tales from the Loop jumps into a crowded field and shows us how it’s done.

Based on Simon Stålenhag‘s art, this game takes us to ‘the 80s that never was.’  It’s default setting is the Malaren Islands, a suburb of Stockholm, Sweden.  There’s also alternate information for using Boulder City, Nevada. Things are very familiar.  Kids ride their bikes around town, try to avoid bullies at school, navigate the confusing world of childhood, and don’t understand their parents.  However, it’s also a sometimes subtly different world. The Loop and technological developments it helped create, loom large. You might be riding a BMX, listening to Wham! on your boombox, and see a robot working a gas pump.  It’s just how things are.

The game mechanics are simple and elegant.  Character creation forges plenty of ties between characters and their greater world.  Plotting and mechanics seem designed to move the story along, not getting bogged down in too much math, too much grueling combat, or extraneous details.  You jump from scene to scene, telling the important parts of the story. Peppered in are moments of ‘normal’ life, dealing with parents, with school, with the scary kid who lives down the street.  Mostly, though, you’re playing out the scenes that reveal the mystery, and plotting how to solve it.

The latter part of the book is made up of four mysteries (adventures).  Three of them could be played on their own, or as part of a larger campaign.  The last one is definitely meant to be the capper of a campaign made of the separate ones.  There’s also information on running a more ‘sandbox’ setting called “The Mystery Landscape,” where there are strange things all around that the characters could get involved with, if they so choose.

The game is about kids.  You’re playing kids from about 10 to 15 years old.  It’s in the vein of films like “The Goonies,” “Stand By Me,” “Super 8,” and “Now and Then,” and TV shows like “Eerie, Indiana” and “Stranger Things.”  But while you’re playing kids, the game isn’t necessarily for kids. I think you could easily run this as a more kid-friendly game, and I think the system would definitely be good for bringing people into the hobby.  There’s enough structure to hold onto, but not so much math and mechanics that it feels like homework (D&D, I’m looking at you!).  However, as written, there are some fairly strong themes that might not be great for the younger gamers.  I also don’t know how much love of the 80s would be there for younger players. You never know, though. I’m into games set in the 20s and the 50s, so maybe younger players would want to try gaming in eras before their birth.

Tales from the Loop is one of the most fun gaming books I’ve read in a long time.  It grabbed me and held my attention. It made me want to run a game. It made me want to play a game.  It made me go back and re-watch a few 80s classics. Tabletop RPGs are a lot more expensive than they were when I was more into the hobby, 20 years ago.  This one is very much worth the price.

4 thoughts on “Tabletop RPG Review: Tales from the Loop”