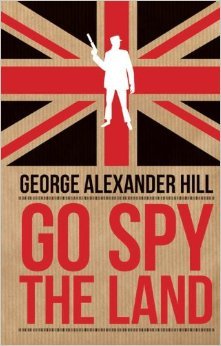 George Alexander Hill’s account of his time in Russia and Eastern Europe during the First World War and the rise of the Bolshevik’s is a surprisingly exciting and seemingly honest first person account.  Hill has a perspective, to be sure, and you’ve got to take any first hand account with a grain of salt. However, in spite of his obvious pro-British and anti-Bolshevik views, he’s not as jingoistic as one might anticipate.  And he isn’t without sympathy for some players on the ‘other side.’

Hill’s tale is a wild one, filled with tough scrapes, larger than life characters, and a sense of inevitable dread.  Part of the dread is out of Hill’s hand, as the author was unaware when the book was published in 1932, just how dark things would get in the hands of the Reds, and just how deep Stalin’s horrors would run.

Other spies of note, like Arthur Ransom, Sidney Reilly, and Colonel Joe “Klondyke” Boyle make appearances, as do Lenin, Trotskey, and others.  I found it interesting just how much espionage and manipulation was going on, on the part of the British, the Americans, and others, and just how close it came to going in other directions.  What if the Bolsheviks had fallen? They seemed on the edge multiple times. Why if the Social Revolutionaries had won the day? Would it still have turned so sour? So many ‘what might have beens.’

Like any ‘eye witness’ account, you can’t take everything in this book as factual or accurate.  It is Hill’s take on what he saw, Hill’s version of the truth. It does give a glimpse into the backstage workings of revolution, counterrevolution, corruption, and the living of double lives.  As Hill mentions, there are countless stories like his that will never be told, due to the nature of the work. When your job is to be secret and unknown, it’s hard for History to find you.