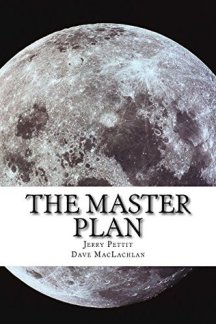 Something to know about me as a reader: I don’t much go in for reading comedy.  Certainly not comedic novels. Even the genuine classic The Hitchhiker’s Guide to the Galaxy resisted my efforts to read it (I finally listened to it as an audio book).  I don’t understand it. I’ve read a few joke books and collections of The Onion, but sitting down to a novel?  Nope. Until now.

With The Master Plan, Jerry Pettit and Dave MacLachlan have created a fun, odd little novel about some agents of a super secret society bent on the very slow and deliberate domination of the world.  When I first got into tabletop gaming, there were card games like Illuminati and role-playing games like Paranoia that tapped into some weird territory, the same territory that would get mined for The X-Files and other such shows.  There’s something of those games here. Weird, convoluted mythologies, super-science, and odd puns. Then there’s the sense of humor, which reminds me a bit of Futurama, a bit of the aforementioned Hitchhiker’s Guide, and more than a bit of what you get when a bunch of nerds sit around a table and get goofy (something I used to do a lot).

I won’t go too much into the story.  A couple agents of the grand conspiracy The Order of the Tainted Mollusk discover an invasion of Earth by someone other than themselves, and they have to go about preventing it.  Likely more than that would make it sound weird and too convoluted, but believe me, you could read this book without a bit of background or prompting. There are plenty of jokes that should thrill nerds of various stripes, but the book stands on its own, and doesn’t demand the reader be an expert in esoterica.  It’s just a few fun characters having an adventure and getting up to some comic hijinks.

Having read a bunch of self-published and small press books lately I was very much struck by the professionalism of the editing.  In fact, the book I’m reading at the time I write this review has, in the quarter of it I’ve finished, had far more typos and editing glitches.  It’s not something I would normally call attention to. I don’t normally mention good proofreading. I sort of assume books should have it, especially professionally released books.  I usually only mention if a book has a lot of mistakes (The Yith Cycle, I’m looking at you!).  However, since the last crop of books I’ve read from indie authors have been filled with mistakes, wrong words, formatting problems, etc. I find myself jumping up and down with excitement reading a book where that’s not a problem.  I only hope my own novel will be as clean when it’s finished.  My hat’s off to these two.

Here’s hoping there will be more coming from this pair.