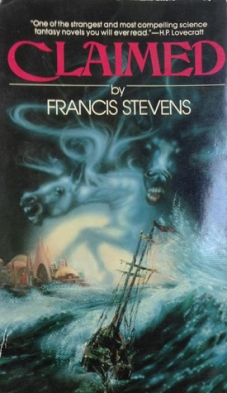 Over the years, I’ve tried to read some of the books that inspired my favorite writers.  H.P. Lovecraft was fairly vocal about what he liked and what he was inspired by.  He has provided me a good list to work from.  Claimed is an especially interesting one because of its similarities to themes Lovecraft would explore, and its wildly different style and tone.  Where Lovecraft tended to emulate the written style and concerns of what would have seemed old-timey writers to his contemporaries, Francis Stevens wrote a very contemporary (for 1920) novel.  The language and characters would have fit just as comfortably alongside F. Scott Fitzgerald as anything else.

The story about a wealthy man and his niece who recruit a young doctor to help them with a supernatural curse, the book drips with ethereal, supernatural dread.  With its dabbling in lost civilizations, ancient writing, and sinister foreigners, you can definitely see the appeal for Lovecraft. That said, the inclusion of a fairly competent female character is a stark contrast.  There’s definitely more proto-Roaring 20s romance, with hinted lingerings of Gilded Age longing, than you’d ever find in Lovecraft, and rarely find in others of the Weird Tales generation.

The writing is crisp and the story moves.  It’s full of colorful characters (not to mention a few broad stereotypes), and has some excellent moments of creepiness.  Unfortunately, it has a weirdly abrupt finale. It felt like she had another hundred or so pages left in the story she was trying to tell, but was cut short and had to slapdash an ending.  I would have liked more in the final act, as it felt like it was really getting good. Whatever the case, I’m going to have to track down some more Francis Stevens, though I don’t think she wrote a lot.

Odd side-note that has nothing to do with the original novel.  The edition I read (pictured), says the events happen in San Francisco, but the book is actually set on the Mid Atlantic coast.