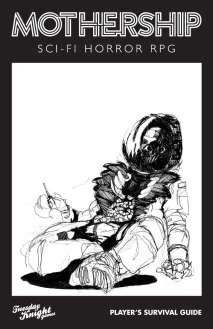 Science Fiction and Horror are my two favorite genres for Tabletop Role Playing, so mixing them together is a no-brainer.  Tuesday Knight Games’s Mothership is a tiny little digest that packs a lot into a few pages.  There are echoes of Call of Cthulhu in its mechanics, and hints of Traveller in its gritty Sci-Fi vibe.  If you’re looking to role play in the universe of Alien, Outland, or Dead Space then this system has what you need.

As I was reading through, I kept thinking about how much I’d enjoy playing in a game like this.  It really got me thinking about those Science Fiction stories where space is tough, where getting from one planet or spaceport to another is a challenge, where death waits for you at every turn.  Sure, death could come in the form of cosmic horrors lurking in the Black, but it could just as likely come from one of your fellow crew going mad from isolation and turning to murder.

I want to break this game out with a few like-minded friends, create a ship and a crew, and maybe play a troupe-style game where different people take on the role of game master (here called a Warden) from one session to another.  Though not clunky or over-complicated, there’s something wonderfully ‘old school’ about this game. It’s very much on my radar as one I’d like to play.