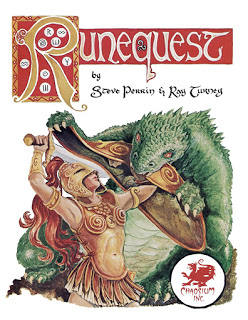 I cut my teeth on Worlds of Wonder from Chaosium, which used their Basic Roleplaying System. That’s the same core game mechanic (rules) as Call of Cthulhu, Stormbringer, and of course, RuneQuest.  I know that I used to flip through RuneQuest books when I was starting out, looking for little ideas and variations I could use in my own games. But I don’t think I ever embraced the game or its world, Glorantha.
When I heard that the folks at Moon Design were working with Chaosium, including some of the original developers, to bring back the classic edition of the game, I figured I had to chip in.  So I supported their Kickstarter campaign. My hardcover copy recently arrived and I’ve been picking through it for the last week.
The first thing I noticed is that this game is very much of its time. Now, I don’t mean that to be too harsh, but as I read through it, I was reminded of a lot of the things about early roleplaying games (rpgs) that were problematic or frustrating for me. Thankfully, the core mechanic of this game is fairly easy and intuitive. But explanations can get a bit obtuse, and frankly, the game is far, far more ‘crunchy’ than I enjoy. (Crunchy is a term applied to games with more complicated, often math heavy rules). There are still some pretty strong traces of strategy games and miniature combat rules floating through the book.  That’s fine for folks who are into that kind of thing, and the gods know, D&D is still sick with it.  But it’s not my thing, and I don’t feel like it’s as present in some of the other Basic Roleplaying System games (Call of Cthulhu being the one I’ve had the most experience with). I kept finding myself thinking; “well, I wouldn’t use that,” or “I’d cut that whole bit out.” Not that there’s anything wrong with modifying rules to fit your style, I just found myself doing more mental editing of these rules than I’ve done to any in a long time.
The second thing that struck me about RuneQuest that I really didn’t remember from reading it as a lad is that it’s a Bronze Age game, not a Medieval game. It’s a very, very High Fantasy Bronze Age game.  Magic and gods are real, frequent, and important to everyday life. There are parts of it that feel almost like Tolkien’s The Silmarillion, they’re so out there. And while there are obvious callbacks to Tolkien and European mythology, the setting has its own vibe going on. There are hints of Sumerian and Greek, bits of maybe Mesoamerican, and other stuff that’s just pure fantasy. In this High Fantasy/High Magic world, there are lots of different intelligent species, and things we’re not used to being intelligent that can talk and do other things. It’s certainly not my usual type of Fantasy setting, having more of Narnia than expected. But it could be interesting for a change of pace. It’s probably the closest to a Dungeons & Dragons game I’d likely run (well, maybe Earthdawn…). But at least it doesn’t have levels and alignments.
Overall, RuneQuest 2nd Edition is a nice little look back at the early days of gaming, and a much better alternative to D&D. But it’s also a reminder of how far games have come, and I don’t know how likely I am to ever run it. Too much number crunching, too much paperwork, and maybe a bit too much regimentation. Still, I find the Glorantha setting intriguing. It’s very much not the kind of Fantasy I tend to like, and very much not the sort I’d be inclined to run a game in. But it has enough of that ‘old school gaming’ vibe, without the terrible base mechanics of D&D (or Rolemaster, or some of the others of the era). I don’t know. Maybe, if I had a group of friends who wanted something more in the vein of 70s rpgs…Maybe I’d give it a go. I’d still probably strip some of the more unwieldy bits.
If you like what I do, you can buy me a coffee. Check out my Facebook, Twitter, YouTube, or Goodreads.  And take a look at my Patreon page, where I’m working on a novel and developing a tabletop RPG setting. I’m proud to be an affiliate of DriveThru RPG. I’m an independent author. You can also read my fiction over on Amazon. A rating & review would make a world of difference.