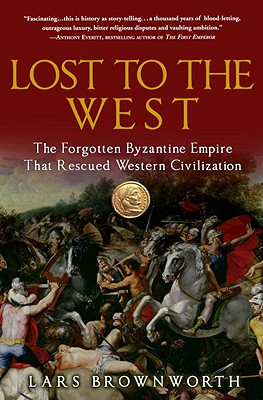 Lars Brownworth’s history hangs like a purple cloak off the rather broad shoulders of Byzantium, the oft forgotten remnant of the Roman Empire that survived right up to the Renaissance.  It felt like reading a novel, but one where the protagonist was a city, not a person, and where the various characters were events that happen along the city’s journey.  The rise and fall, and rise again progression as it conquers and endures, destroys and creates, explores and forgets is like the life of an extraordinary person.

What I’ve found, as I’ve read a larger and larger array of history texts is that everything is connected, nothing happens in a vacuum, and once you think you’ve heard the story, you need to start digging, because you haven’t heard the half of it.  The best history books I’ve found take an idea, a place, a person, or something, and then tell history through the perspective of that one thing.  The Fourth Part of the World tells the history of exploration through the story of the first map to name America.  Salt tells the story of…well, salt, and how it was important to human history.  Flapper tells about the cultural shift in America during the 1920s using the iconic ‘new woman’ as an anchor.  In this book, the story is of a culture, a city, an empire, all centered around the city of Byzantium aka Constantinople (more recently known as Istanbul).  And it’s a rich story, with names you’ll know and names you’ve never heard of; villainy and heroics enough for a dozen blockbusters and then some; not to mention timely lessons to learn of encouragement and caution (not taxing the rich has been tried before, and we can see the results pretty clearly).

It begins with the latter days of what we typically think of as the Roman era and the beginning of what in Western Europe would be the Dark Ages.  But things don’t play out the same in the East, with civilization holding on, adapting, and flourishing.  There are setbacks, and the evils of sectarian violence plunge generations into darkness as Paganism gives way to Christianity and Christianity fractures in ways that presage the more commonly known Protestant Reformation.  The rise of Islam, the coming of the Mongols, the shaping of Eastern Europe and the modern Middle East, the Crusades, the East/West cultural division, and yes, seeds of the Renaissance.  And along the way, so many characters, from generals to concubines to emperors, each worthy of great novelists, come to life.  Justinian, Theodora, and Basiliscus make for a trifecta of drama that would eclipse Arthur, Lancelot, and Guinevere any day.  The first Constantine was a complicated cat, hardly the iconic hero of Christendom he’s frequently made out to be.  And the last Constantine…well, he was something, too.  And some other names, familiar to me from my reading about the Cathars, the Moors of Spain, and the rise of Italian power all drifted through.  Heck, there are even mentions of Vlad the Impaler and Marco Polo.

A fascinating book, well worth a read for any history buff, but especially for someone interested in lesser known chapters, or some of the roots of many issues we face today.  Where do some deeply held cultural divides stem from? Why were the rulers of Russia called tsars (and what connection does that have to a certain famous Roman)?  Where did the Cyrillic alphabet come from?   Find out.  It’s one of the more readable histories I’ve seen, and a fascinating subject.

4 thoughts on “Book Review: Lost to the West”