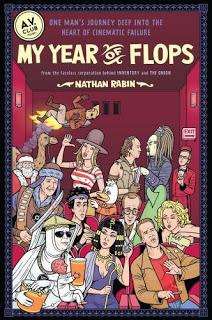 “All cinephiles reach a moment in their intellectual development when they realize that Oliver Stone is full of shit.”

It may come as a surprise to some readers that I’m something of a movie fan.  Since I was a wee lad, I’ve been fascinated by movies, by their stories, by their stars and creators, and by their techniques of realization.  And sure, I’ve loved big budget, hugely successful movies like “Star Wars,” “Raiders of the Lost Ark,” and “The Karate Kid.”  Yes, I’ve loved classics like “Casablanca,” “Lawrence of Arabia,” and “2001.”  But along the way, I’ve also embraced the failures.  Those movies that never connected with the masses.  Movies of such distinct vision, or strange message, or ambiguous narrative, they almost couldn’t help but fail.  Movies that went for it and strove to be different.  Movies like “Howard The Duck,” “The Adventures of Buckaroo Banzai Across the Eighth Dimension,” and “Southland Tales.”

For a film fan like me, it doesn’t have to be high brow.  It doesn’t have to be ART!!!  Heck, sometimes it just has to be mildly entertaining or feature a brief surprise.  But generally, it has to be fun or interesting.  Preferably both.  Consequently, I find myself watching a lot of movies the general public turns their collective nose up at.  No, I’m not saying my taste is better.  But when you hear people rant and rave about how they don’t make good movies anymore, while said ranter and raver talks about how great and ‘creative’ “Avatar” was, you have to wonder.  But looking under the rocks, at the movies most people passed over, you find the gems.  You find the really interesting, sometimes bold, often heart-filled movies that make me love the medium and remind me that they do make great films, they’ve always made great films, and they will continue to make great films.  And many of those have been, are, and will be commercial and critical flops.

Nathan Rabin’s book, My Year of Flops is devoted to those movies, famous and not so famous films that failed to connect, or just failed.  A few obvious choices like “Ishtar,” “Glitter,” and “Cleopatra” are bolstered by a roster of more obscure and forgotten movies like “O.C. and Stiggs,” “Bratz: The Movie,” and “Breakfast of Champions.”  Rabin looks at these movies through the eyes of a man like myself, who loves movies, and wants to give them a fair shake.  Even his rating system reminds me of my own feelings about movies.  “Failure, Fiasco, or Secret Success.”  A failure is just that.  It’s a movie that fails on all counts.  It’s not well written, it’s not well acted, it’s poorly conceived and/or executed, and generally it lacked vision or passion.  A fiasco is a movie where a lot went into it, passion, money, mountain-moving effort, etc., but for whatever reason, the end result was a disaster.  And obviously, the secret success is the movie that was actually really good, but never caught on.  There aren’t a lot of ‘failures’ in this book, and I think that makes sense.  To be a really good flop usually takes a lot of effort.

The book had me laughing boisterously on many occasions, as his descriptions of the movies, of their failings, of the effects the movies had on himself, his friends, critics, etc., build to some awe inspiring bits of insanity.  His story of seeing “Postal” pretty much by himself at a gigantic theater, and the projectionist sheepishly admitting he found the movie kind of funny…Gold.  The interviews with a very confused Michael Jai White about his time working on “Breakfast of Champions,” or with a wrathful Richard Dreyfuss about working with Oliver Stone on “W,” among others feature insights into the making of, and living with flops.  But in spite of the irreverent, expletive peppered writing, it is always obvious that Rabin loves what he does.  He respects the medium, and tries to find the good.

“If 70s cinema was a lowbrow slobs-vs.-snobs comedy, Altman would be the John Belushi-esque Dionysus tossing Peter Bogdanovich in the pool, shattering his monocle, and soaking his silk ascot.”

Rabin bookends the whole with “Elizabethtown,” one of the movies that inspired the project in the first place.  It’s fascinating to see his take on the movie at the beginning, and then his take on it three years later, after working on this project (a web article and then this book).  I’ve experienced similar things throughout my life in film fandom.  Heck, every 6 or 8 years I give “A Clockwork Orange” another try, thinking maybe this time I’ll like it.  On paper, I should LOVE that movie.  But I HATE it.  Still, maybe one day.

As an added bonus, the book has an appendix.  “Waterworld: Director’s Cut,” Minute-by-Minute.  This ‘as it happens’ report from the front lines of horror is hysterical and painful.  But like I frequently say, I watch these awful movies so you don’t have to.  And he’s taking a bullet for the rest of us here.  Read it, laugh at it, learn from it, and don’t make the mistake he did.

This book should be a part of any film fan’s library.  A must read for the movie buff.  It’s funny, fast paced, informative, and it comes from love.  It’s dangerous though.  It’s made me really want to see some movies I’m quite sure are terrible (“Glitter”!), and it’s made me want to revisit some movies I genuinely disliked (“Postal”!).  But there are some I have a feeling I’ll really dig (“Joe VS the Volcano”).

One thought on “Book Review: My Year of Flops”