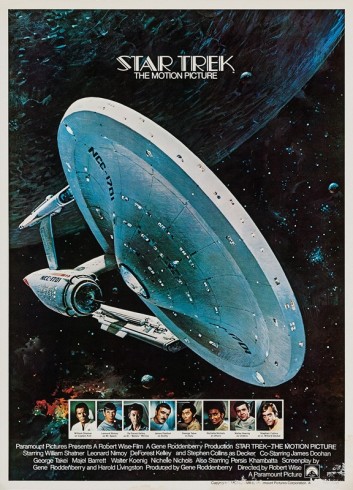 People say that there’s some kind of ‘curse of the odds’ thing with Star Trek, where only the even numbered movies are good.  I don’t agree with that.  “The Motion Picture” gets a lot of flack for being boring, I don’t think that’s the case at all.  It isn’t an action movie, which is something a viewer needs to know from the start.  It is much more the attempt at thoughtful science fiction the show tried (and rarely succeeded) to be.  This is much more in the spirit of “2001” than “Star Wars,” which is probably one of the reasons it isn’t generally well received.

The story is, like many of those of the original series, quite simple.  Something big and powerful is heading toward Earth.  Kirk and friends get roped into figuring out what it is and how to stop it.  Spock has lost his spiritual way, and comes back to join Kirk and the rest, looking for something, for a purpose.  That’s basically it.  That’s the so called A plot.  The B plot is about a young captain with a chip on his shoulder, and his alien ex-lover.  In the original show, the crew of the Enterprise came across many godlike beings and many supercomputers.  In some ways, this story is a culmination, or perhaps a distillation, of those episodes.  Elements of ‘Nomad,’ the ‘Doomsday Machine,’ the ‘Squire of Gothos’ among others can all be found.  And then there are the elements that would be carried over into the future.  Obviously, there’s Jerry Goldsmith’s theme which would open ‘Star Trek: The Next Generation.’  But also, the story of Decker and Ilia would be recreated in Next Gen with Riker and Troi.  It plays out differently, but it’s clearly a dry-run.  There are also elements I think laid some groundwork for what would become the Borg.

There are problems with the film.  I had enjoyed Stephen Collins in other work, but I don’t like him as Decker at all.  And now there’s the added complication/taint of his criminal activity, which makes it a bit awkward to watch.  The wormhole sequence is silly and wastes runtime like the action scenes in most contemporary blockbusters.  The color scheme is odd, being mostly grey and beige.  And yes, some of the sequences go on for a long, long time.  I don’t mind.  Like “2001,” there are extended shots of ships in space, landscapes, etc. with swelling music.  It isn’t action packed.  It takes its time.  I understand why many might not like it, but I’ve come to appreciate these moments of grand exploration.  Once again, taking a page from “2001,” this movie is in part about the evolution of humankind, about our children, not individual children, but the children of humanity.  At its heart, the movie is about the nature of being, about the meaning of life, and about the desire to know.

Like ‘The Cage’ and ‘Where No Man Has Gone Before,’ this is a start in a direction I think could have been very interesting.  But it was not to be.  With “Wrath of Khan,” Star Trek shifted gears as dramatically and definitively as it did with ‘The Man Trap.’  Fist fights and space battles would be the name of the game.  Like those original pilot episodes, this feels out of step with the rest of what was to come.  A false start.  But it’s an intriguing start.

You can also check out my fiction on Amazon or Patreon.