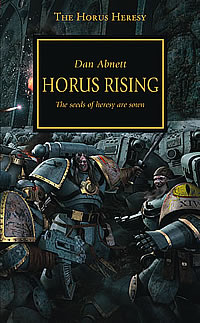 I’ve been a fan of the Warhammer 40,000 universe since I first got into gaming in the late 80s.  Playing 40K on the floor of my brother’s apartment while listening to Ministry was just about the coolest danged thing a 12 or 13 year old boy could do.  I fell in love with the art and the British Punk sensibilities, as well as grim super-future that mixed Medieval Europe, Dune, Star Wars, and a ton of other stuff.  As I grew older, worked in a game store, played more 40K and eventually tried other games, I grew tired of the tabletop game.  Frustrating rules, continuously fluctuating armies, and somehow always skyrocketing prices saw me turn in my Space Marines and Tyranids for other games.  And then I realized I got more satisfaction from painting the figures than I did playing the game.  Until that too stopped keeping my attention.  Yet, I always liked the universe.  And once in awhile I’d snag a book, usually a collection of short stories, and take a dip back in.

The Horus Heresy is one of those defining moments of the Warhammer 40K universe.  Going back to that original “Rogue Trader” rulebook, it was there.  A piece of mythology and history akin to the death of Julius Caesar or Alexander the Great.  So I was curious about the series of books they launched (a decade ago, now) based around the Heresy.  Dan Abnett is a name often associated with the 40K universe, but who has achieved success outside of game tie-in novels, as well.  Thus, I finally read Horus Rising, the first in the series.  And you know what?  It’s pretty good.  The thing that’s always struck me as odd, or surprising, is that the books set in the 40K universe, a universe devoted to combat and war, are actually pretty interesting, and stretch beyond battle scenes and macho chest-pounding.

With Horus Rising, Abnett gives us a glimpse into the hearts and minds of soldiers and civilians living their lives in the shadow of conflict.  And he plants the seeds by which good people grow into monsters.  How does Horus, the greatest of the Emperor’s companions become its greatest traitor, plunging the universe into darkness and despair?  Here we see the cracks begin to form.  And beyond them, the taint of Chaos can be felt.

Abnett writes a dense novel, with a large cast of characters.  He fills the pages with memorable people and occasional moments of adventure and horror.  He taps into the things that made me love the universe all those years ago.  This is what happens when you take a property seriously and don’t just hire any hack off the street to churn out a dimestore novel.  This isn’t something Abnett knocked out for a quick buck.  This is a well crafted book.  You don’t have to be a Warhammer 40,000 fan to enjoy it.  It’s a good, solid tale, told well.

And check out my Patreon page and my Amazon page, where I’m focusing on my fiction writing.