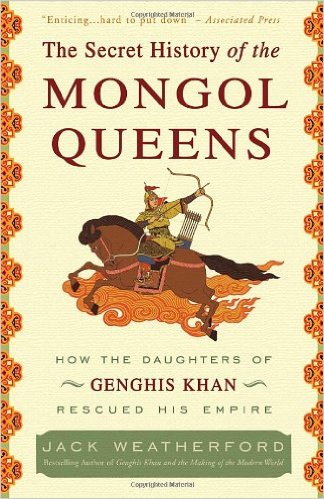 “She did not yet know of what she might be capable. She had no man to fight for her, no woman to advise her. The road before her had no destination and no markers. There were no myths or stories to instruct her, no sayings to guide her. Even if the young queen had learned to read, she had no scripture to inspire her and no priest to counsel her.”

A while back, I read Jack Weatherford’s excellent book Genghis Khan and the Making of the Modern World, and it blew my mind.  Not only did it change the way I viewed Medieval history and the ‘East-West’ divide of civilization, but it inspired my writing and gave me tons of things to research further.  It also left me thinking how crazy it is that there’s not a fantastic movie series devoted to old Temujin.  So, I had to read his follow-up, The Secret History of the Mongol Queens.

This book works best as a supplemental or companion to the former.  Where the first book expanded from the story of one unlikely leader and how he changed the course of history, to a global view of how the things he did have echoed through history, this book looks inside the empire.  It is a more intimate view of life within the Mongol world as it expanded, contracted, nearly extinguished, and then reawakened.  From its earliest days, women were central to its success.  Temujin’s mother was an amazing woman.  His primary wife Borte was herself something special.  But his daughters were interesting people, too; able to take control and direct nations in ways his sons never could.  And then, much later, a strange woman whose life echoed Temujin’s, and who was able to do what no one else could.  So many fascinating characters and world changing events.  The Mongols’ influence on the world stage can not be overstated.

I don’t think this is a book to pick up and read cold.  While Weatherford does give some of the basics of background and general outline of history, I think reading his previous book about the Mongols is almost a necessity.  That’s not a bad thing.  You should read it.  It’s pretty great.  I’d just read it first, then come back to this one.

Also, check out my Patreon, where I’ll be posting more stuff related to my fiction.

2 thoughts on “Book Review: The Secret History of the Mongol Queens”