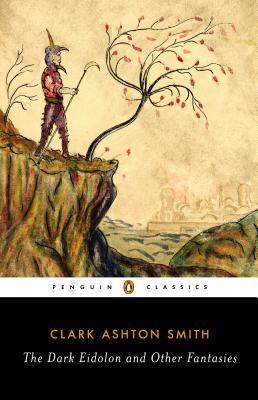 Being a reader of Lovecraft, Howard, and some of the other ‘Weird Tales’ folk from that time, I was always aware of Clark Ashton Smith as another member of the circle.  But I hadn’t read much from him.  For one reason or another, few of his stories made it into various anthologies and little of his work was easily acquired for the non-collector.  Thankfully, that is becoming less of an issue, and this collection is a sign of that, being from the Penguin Classics line.

I recently read a bunch of work from Frank Belknap Long, who turned out to be very much a lesser member of the Lovecraft circle. But Smith was a different story.  While his fantasy stuff, especially the Zothique stories, are overblown in much the way Lovecraft’s Dreamlands tales are, his cosmic horror stories are great, and I’d argue, often better written than Lovecraft’s.  Like contemporary C.L. Moore, Clark Ashton Smith also seems to be aware of sexuality in a way Lovecraft almost completely lacks.

Of particular note are the stories “The Vaults of Yo-Vombis,” “Genius Loci,” and “The Treader of the Dust.”  All are quite good.  Yo-Vombis is clearly an homage to Lovecraft’s great “At the Mountains of Madness,” but has its own distinct charms.  “Genius Loci” has a great, creepy, Americana meets Gothic horror thing that I loved.  And Treader is really creepy.

The volume also contains ‘prose poems’ which I guess would be considered ‘flash fiction’ today.  They’re very brief vignettes, few of which I’d call poetic.  And then there are the actual poems.  As I’ve said before on this blog, I don’t get poetry.  That which appears here seems fine, but I couldn’t tell you.

Clark Ashton Smith is a mostly forgotten author from a golden time in American literature, where the genre fiction we love today was in its primordial ooze phase.  He deserves to be read along with Lovecraft, Moore, Howard and the rest.  Unlike Long, who rarely rose above the ranks of forgettable filler, Smith was a headliner, and earned it.

As always, you can check out my Twitter or my Facebook, and even my Goodreads, if you’re so inclined.
If you’re interested in my fiction writing, check out my Patreon page, where I’m working on a novel, a tabletop RPG, and various other projects related to my Conquest of the Sphere setting.  And you can now read an old story from my early days of developing the setting on Amazon.

2 thoughts on “Book Review: The Dark Eidolon and Other Fantasies”