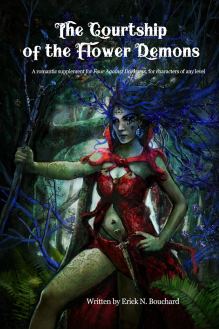 Four Against Darkness at its most basic is a throwback to the early days of dungeon crawling tabletop RPGs, with random passages and encounters, and lots of hack & slash and puzzle solving.  With The Courtship of the Flower Demons, Erick N. Bouchard takes the game in a very different direction.  It’s still got a good random element, but this time around things are focused more on the wooing and seducing of and by demons.

I like that the vibe of this book leans more toward Clark Ashton Smith than Jack Vance.  It’s dreamy and strange, with dashes of eroticism. In a lot of ways, it reminds me of traditional (pre-Victorian) Faerie realm stuff.  Chaotic, claustrophobic, dangerous, and exciting.

The Flower Demesne can be plugged into your existing game with little effort.  It’s essentially a pocket dimension, reachable through a magic portal. There’s plenty of reward for someone brave and strong enough, but it’s also very easy to get lost and never find your way back to the realm of the real.

Like Four Against Darkness, I have some issues with organization.  For example, it isn’t until page 37 that the book gets into “How to Play,” which would have been very handy much earlier.  I found myself reading through a lot of the early part of the book trying to take in the info, but unable to see just how it would be applied to a game.  Once I read the “How to Play” part, things suddenly became much clearer.

If you want to take your Four Against Darkness game into much stranger, more dreamy and sinister territory, or if you’re interested more in the creation of potions and the wooing of strange demons, this should be quite handy.  It’s open to characters of various levels, though I suspect it will be very challenging to lower levels.

2 thoughts on “Tabletop RPG Review: The Courtship of the Flower Demons”