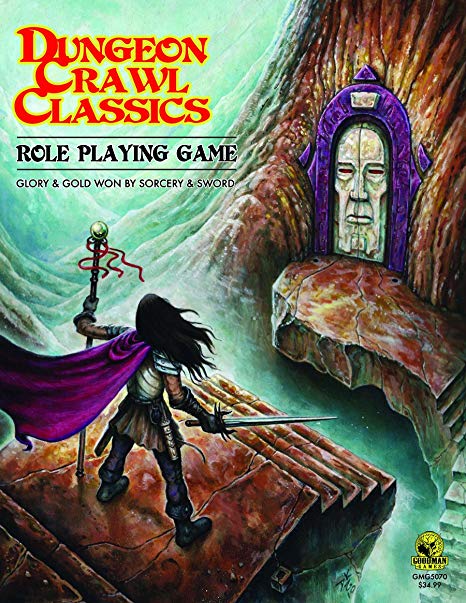 One of the stumbling blocks I’ve frequently faced in my pursuit of the tabletop role-playing hobby is a particular and fairly strong dislike for Dungeons & Dragons (and all its various permutations and editions).  Though technically it’s the first RPG I ever played, when my brother let me play a lizard man in a game he was running when I was maybe 5 or 6 years old, it wasn’t the game that got me into the hobby.  That was Worlds of Wonder from Chaosium, for years my go-to game.  When I eventually went back and played some Dungeons & Dragons (I don’t know what edition), I found it extremely frustrating.  It was all the things I didn’t like about video game RPGs (many of which built off of D&D ideas).  I constantly fought against the game’s rules, instead of using them as a framework for building a cool character and story.  Because it was always the preeminent tabletop RPG, D&D had to be all things to all people, and it had to weather the strongest storms of public outcry during the Satanic Panic of the 80s.  I think that’s why it became ultra-sanitized, homogenized, and as I frequently called it: Disney-fied.  Take a look at its most popular setting, The Forgotten Realms.  You’ve basically got Disney’s tour of History and Geography. It’s all white people in costumes. Everyone’s got essentially European culture, tweaked with some lip-service to whatever historic culture has been co-opted (seemingly at random) for whichever location.  Eventually, everything had this samey, cartoony, shadow of Tolkien thing I’ve never liked.  Rules that felt constricting combined with settings and mindsets that felt bland and stultified…No thank you. Yet, D&D remained the go-to game for most fans of the hobby.  It was the game that weathered the storm of the internet, when so many gamers fled to online activities and game companies and local stores withered and died.  Sure, it changed hands. It went through a couple editions. It sparked some nerd-rage here and there. But it survived.  And when I started paying attention to the hobby again, it was once again the game everyone seemed to be playing.  Yet it was still a game I didn’t have any interest in.

That’s when I heard about Dungeon World.  Though it produced in me a meh.  Still, I kept hearing about it and some of what I heard sounded pretty cool.  So, I checked it out.  Here was a game made by someone who must have played D&D and had some of the same complaints that I had and decided they could make the system fun and playable.  I haven’t had a chance to play it yet, but it looks like a lot of fun.  The more I read about Dungeon World, the more I came across mention of Dungeon Crawl Classics.  I saw some of the books and heard it name dropped a few times, but it didn’t sound like it was up my alley.  Just sounded like someone was doing their own D&D books.  Whatever.  However, I eventually saw a review that led me to look a bit deeper, and that in turn prompted me to pick up the core book.  Wow. Dungeon Crawl Classics is really something.

When I played a lot of varied games with a lot of varied people back in the late 80s through the early 2000s, there was a type of game often referred to as a ‘beer and pretzels.’  This meant that the game was fun but not to be taken too seriously.  Examples of beer and pretzel RPGs would be Ghostbusters or Paranoia.  These sorts of games seemed to fall out of favor in the 90s, as more serious, story and character based games became the norm.  Apparently a hunger for those types of games still persisted. DCC attempts to recapture the feel of the original 1970s version of Dungeons & Dragons, and I think it does that quite well.  But I think it succeeds most in creating a magnificent beer & pretzels game.  Usually when I read a really good RPG, I keep coming up with cool character ideas or great plots. While reading DCC, I just kept picturing sitting around a table with a bunch of friends, laughing as a wizard’s spell goes wildly out of control, chuckling as another character gets eaten by a mutant plant, or doing a spit-take when a peasant heroically kills the big baddie with his crowbar.  The sense of fun this book gave me was something I haven’t seen in a long time.

Dungeon Crawl Classics has system features I generally don’t like.  It’s level based, which is something I’ve never cared for.  It has alignments, though the alignments are simplified and work better for me (Law, Chaos, and Neutrality, kinda like in the early days of D&D).  Again, those things aren’t my jam.  Only Earthdawn ever really made levels work for me, and even then I had my issues.  However, because this isn’t a game that delves deep into motivations, or one that looks to tell grand and intricately plotted stories, because it’s essentially a game to play when you just want to hang out with friends, have a few drinks, have a few laughs, and not worry too much, the level thing works.  A lot of the randomness works. Random encounters, mutations, spell effects, etc. all feel like part of the fun.  Like Paranoia, losing three or four characters in a night isn’t a bug, it’s a feature.

In a sense, this feels like it would be a more ‘detached’ game.  Third person rather than first person in its narrative.  Where some games are all about getting into the head of your character, thinking about the world they live in and how it affects them, etc., DCC feels more like you’re watching something happen to someone, and only directing them through the action.  In that sense, it’s more like a video game, but it still has the social and imaginative aspects of tabletop RPGs.  It might be a game that would be more fun for the casual gamer. You’re not likely to be any more invested in the way things turn out in a night of DCC than you would be playing a game of Evolution or Ticket to Ride.

I’ve seen a lot of people going on about Appendix N, Gary Gygax’s list of inspirational writing.  Frankly, it’s weird how much positive and negative writing I’ve seen about this. DCC definitely references it a lot, and it’s clear that recreating the atmosphere and style of the books listed there was part of the mission of the book.  I think they’ve done an admirable job. You get a sense of pre-80s, weird Fantasy. This game is in a similar headspace to Fritz Leiber’s Lankhmar books or Ralph Bakshi’s film Wizards.  But it’s also clearly stated that one shouldn’t limit one’s reading or viewing, or where inspiration is taken from.

I’d be remiss if I didn’t mention the artwork, which the book is crammed with.  The style varies, but it’s all got that early RPG, printed in the basement, drawn on a notebook in high school study hall kind of vibe, which totally works with this game.

Generally speaking, Dungeon Crawl Classics is not the kind of tabletop RPG I’m into.  I like character and plot based games. I like systems and mechanics that serve as only the thinnest of scaffolding on which to build stories, getting out of the way 99% of the time.  The less dice rolling, the less page flipping to see how something works, the better. However, DCC seems like a tremendous amount of fun, and is absolutely a game I want to try.  It seems like the ideal game to play between other, more serious games. If you’ve just wrapped up a three year game of Ars Magica, and everyone’s a bit burnt out, this would be a nice pallet cleanser.

(Edit:  Since this review was originally written, I’ve had a chance to play DCC a few times and even run a game.  I had a blast, and definitely want to do more.  I’m even thinking about trying to run an ongoing game…which might be weird, but hopefully cool.)

If you like what I do, you can buy me a coffee. Check out my Facebook, Twitter, or Goodreads.  And take a look at my Patreon page, where I’m working on a novel and developing a tabletop RPG setting. I’m proud to be an affiliate of DriveThru RPG. I’m an independent author. You can also read my fiction over on Amazon. A rating & review would make a world of difference.