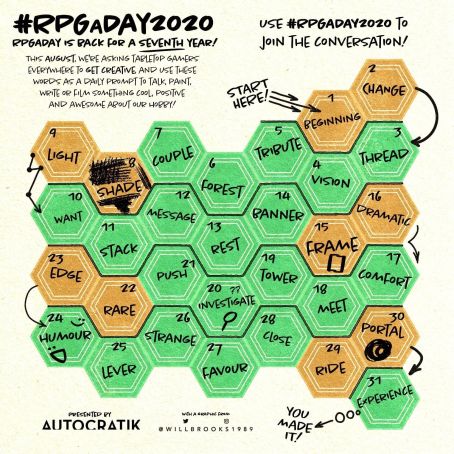 I started participating in RPG a Day a few years ago.  At the time, I’d attempted to run one game in about 10 years and it hadn’t gone well.  Since then, I’ve managed to go to a game convention (my first), play in a few games, and run a few as well, with some success.  It feels good to be getting back into the hobby that’s brought me so much joy over the years, even if it’s been in fits and starts.

Day One: Beginning.  Let me try (and fail) to be creative with my answer here…  Beginning a tabletop RPG is one of the most exciting and stressful things I ever do. I have an idea packed with a near infinite amount of potential and unknowns. I’ll have just a couple hours to capture the attention and imagination of a few friends around a table.  I hope they’ll pick up the threads and begin to weave a story with me.  Where will the story go?  I don’t know! Let’s find out.  Picking the ideas, selling them to the players, and then getting those players to invest in the game, their characters and the story…that’s really difficult.

Day Two:  Change.  I’m constantly changing things based on what players do. I’ll scrap whole plot lines, add random characters, create new pathways. Sometimes the best stuff comes from on the fly alterations, even if it can be frustrating to lose sometimes weeks of prep work.  This is a huge challenge, and I’ll admit, I’m not the quickest on my feet.  I can’t always pull things off as well as I’d hope and like.  Still, it’s a major part of running a game.  You’ve got to know that players won’t go the way you expect, and you’ve got to be able to roll with that, changing what needs to be changed.

Day Three:  Thread.  I was thinking about stories as a thread that ties us together, ties us to our pasts, and guides us to our futures. Sure. OK.  I guess that’s true.  But let’s look at how I find a story, as a writer, as a GM, and as a TTRPG player. I find a loose thread, I worry it, pick at it, then I start pulling on it, looking for where it might lead. I rarely know where that thread will take me, but I want to find out.  It’s very easy to get myopic, to think that this one clue or idea needs to be hyper-focused on to the exclusion of all others.  In truth, the thread is usually just one of many, woven together into a greater fabric of a story or a setting.  Still, each thread can produce lots of great moments.

Day Four: Vision.  I always have a vision of how things will play out, what a game session will look like, how players will react. It is always wrong. Always. Often catastrophically. I guess that’s half the fun.  Visualizing the session ahead of time gives you lots of ideas for options.  I think about my players and what I know about them.  I think about the things that interest them, bother them, or bore them, and try to plan accordingly.  Yet, no matter how sure I am that Player A will latch onto Idea 7, they’ll throw me a curve ball and skip right to Idea 23 and bring everyone else along for the ride.  So, have a vision, but don’t be locked into it turning out the way you see it in your head.

Day Five: Tribute.  From the Latin tribus, meaning tribe…which doesn’t really have anything to do with anything but I just found that out, so I thought I’d share it.  Let me get all spiritual or whatever.  Our hobby pays tribute to all those chroniclers, storytellers, and historians from days past.  We continue ancient traditions in new ways.  I’ll show my own leanings when I talk about this.  Some folks lean toward the wargame side of things.  Tactical combat and simulationist rules are what they’re at the table for.  That’s not me.  In its purest form, Tabletop RPGs are a collaborative storytelling exercise.  Two or three or five or six of us sit around a table instead of a fire.  We imagine heroes and villains, adventures and setbacks.  We create stories together, each adding bits of their own imagination to make something no one member of the group could have dreamed up.  When everyone is really present and invested, memories can be made that will stick with you for a lifetime.  Some of those stories live beyond their telling, being passed on, sometimes even into literature and the larger cultural scene.

Day Six: Forest.  Sometimes I can’t see the forest for the trees. I get so bogged down in detail, plotting, world-building, etc. Considering no plan survives the first encounter with the enemy…  One of the things I’m working on, as I slowly flex muscles that have atrophied over the decade plus since I was regularly running and playing in tabletop RPGs, is the ability to roll with the punches, to work on the fly.  I’ve been sniffing around Dungeon Crawl Classics lately, a game that harkens back to the early days of the hobby, while also managing to be somewhat modern.  It’s a game where fate is fickle and the whims of chance play a major role.  I’m hoping that by using the game, I’ll help to train myself on how to worry less about the planning, the detail, and the specifics, and get more into riding the waves of a chaotic ocean.

Day Seven: Couple.  It just takes a couple hours, sitting around a table (digital or analog) with some friends, to create something special, memories you’ll carry with you for the rest of your life.  A couple hours, a couple friends and you can build worlds, people them with colorful characters, recall thrilling adventures and maybe even expand your mind a little bit.  There’s a magic to it.  I’m reminded of a line from the fantastic Japanese film, Why Don’t You Play in Hell?  The line is about making movies, but I think it fits tabletop RPGs perfectly, as well.  “It’s bullshit. But it’s holy.”