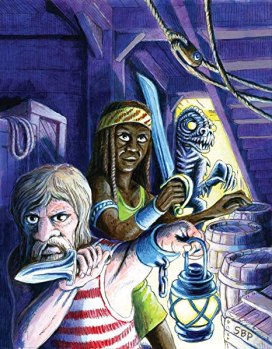 Another Dungeon Crawl Classics “Horror” module, this level zero “funnel” adventure seems like a real meat grinder.  According to author “Spooky” Stephen Newton, it led to a lot of Total Party Kills in playtesting, and I believe it.  By their nature, funnels are going to have a high body count.  The idea is to take a whole bunch of lame red-shirts through a harrowing experience and whoever comes out on the other side should have the chutzpah to survive in the fickle world of DCC. This one, though.  Jeez.

It starts out with everyone waking up, shackled in a ship, surrounded by death.  Something awful has happened, and it’s up to all your little level zero characters to escape, figure it out, try desperately to survive, and maybe get off the boat alive.  Good luck.

The module is inspired by Horror stories like “The Thing” and “Alien,” with their claustrophobic environments and implacable foe.  There’s some investigation mixed with moments of violent horror.  Characters are going to have to be quick, smart, lucky, and tough to make it through.

Thankfully, there’s some advice for toning things down a bit, in case you’re worried about having a TPK.  I think if you’re running it at a convention or something, you can go for the gusto and don’t hold back.  However, if you’re using this as an opening to an ongoing game, you’re probably going to want to take some of that advice.  I might take it a step forward and simply cut a few of the hazards, but I don’t know.  Some of the fun of DCC is watching in bemused horror as your characters get turned into chicken-feed.  My one additional piece of advice would be to boost the reward at the end of the scenario.  If your PCs make it through, they deserve more than just survival.  A kickass magic item or some serious money might be in order.

Overall, this one seems like a lot of freaky fun.  You may want to prepare with some trackers to really keep the tension up.  Tracking monster actions and making each PC action really count can help with the paranoia and sense that the clock is always ticking, which it very much is in this scenario.