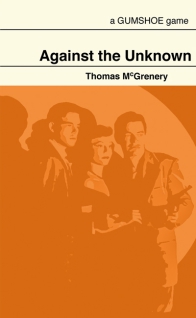 I’ve been a fan of the Call of Cthulhu tabletop role-playing game for a long danged time.  I started on Basic Roleplaying, which uses the same core mechanic, and I got into Lovecraft and other Weird Tales writers pretty early.  Having played and run Call of Cthulhu over the years, it’s produced some of my more satisfying gaming experiences.  However, something about it has never quite worked for me.  The game is mostly about investigation and the discovery of clues, so that characters can figure out what’s going on and how to stop it.  Yet, players spend a lot of time rolling for the same handful of skills time and again, and very easily miss key pieces of evidence because of dumb luck.

Enter Gumshoe and Trail of Cthulhu.  Gumshoe is a game with a system based on investigation, where it’s assumed you find the needed clues if you just look for them.  There are some other game mechanics, but the key thing is about finding clues, and letting those mechanics and dice rolls get out of the way.  It’s very ‘rules light’ and I like that.  Trail of Cthulhu is a specifically Lovecraft based game that uses the Gumshoe mechanics.  I hope to read through it in the coming weeks.  And I’d like to try my hand at running it.  I think it may work even better for running a Mythos game than Call of Cthulhu.

Against the Unknown is a very, very stripped down version of Gumshoe, which I guess is ostensibly for running pulpy/noir type stories (like Mickey Spillane or Raymond Chandler).  The book is only 40 pages long, and features lots of (I’m assuming public domain) clip-art, which is fine at capturing the mood.  The rules are brief and seem easy.  I have yet to try them, but I’m looking forward to doing so.  While it has the capacity for combat and such, it seems much more about investigation and exploration, which is in line with my style of game.
Check out my Facebook or Twitter.  And take a look at my Patreon page, where I’m developing a tabletop RPG setting. You can also read my fiction over on Amazon.

One thought on “Tabletop RPG Review: Against the Unknown”