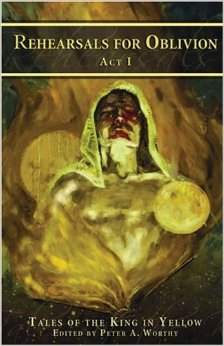 Robert W. Chambers wrote a lot, but very little of particular note. It is sad, looking at his work, that he spent most of his efforts creating dated and forgettable fluff, rightfully lost to the ages. But those few worthy nuggets are in his collection, “The King in Yellow.”  H.P. Lovecraft was a fan of Chambers’s weird tales, and borrowed some elements that went on to become core to the overall Lovecraftian (often called Cthulhu) Mythos. The King in Yellow is a figure, possibly an avatar of a Great Old One, and the titular horror at the center of a corrupting play that drives readers, viewers, and actors mad. There are many reasons, but Hastur and The King in Yellow creeped into my mind and became among my favorite bits of the Lovecraft Circle (along with the obvious rock stars, Nyarlathotep; Shub-Niggurath; and Yog-Sothoth). I especially enjoy the idea that Hastur is manifest entropy. The King in Yellow becomes then an agent of madness, corrupted destiny, and dissipation.

As I usually note in such reviews, anthologies are, by their nature, a mixed bag. Editor Peter A. Worthy has assembled a pretty darned good collection of tales here. There are a few poems, to which I’m totally unqualified to speak. I’m essentially tone-def to poetry. But many of the short stories are very good. Haunting, creeping with strangeness, and touched with occasional bits of beauty. It’s what I want from a book about The King in Yellow.

Not to say there aren’t a few stories I didn’t love, but I think this is an excellent anthology. My only major frustration is that it’s called “Act I” and the blurb on the back intimates that it is but the first volume in larger collection of stories about the King. Alas, I see no indication that there has been, nor will be an “Act II.” The publishing company, Dimensions Books doesn’t seem to exist anymore (I can’t find any sign of it online, anyway). If Mr. Worthy could assemble such a strong anthology on such a challenging subject, I’d love to see what else he might do. That aside, if you’re a fan of the ever expanding Lovecraft Circle, or if you just like a healthy dose of unsettling strangeness in your horror tales, check this one out.

Check me out on Facebook, Twitter, or heck, even Goodreads.  And if you want to check out my fiction, take a look at my Amazon page, or my Patreon page.

2 thoughts on “Book Review: Rehearsals for Oblivion: Act I”