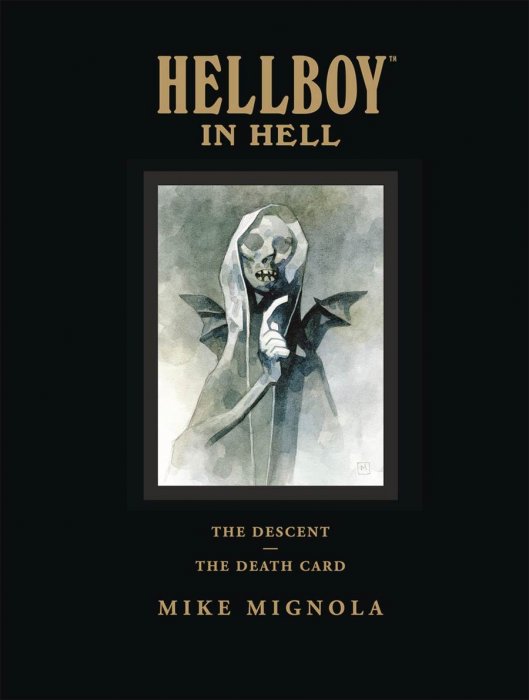 When I was in my mid 20s, my friend Dan, who had been pestering me for a long time about reading comics, finally got me to try some.  I never liked superheroes, and the stapled together, floppy comics were annoying as heck.  But Dan handed me two trade paperbacks.  One was Metabarons, the completely crazy Dune-like comic by professional weirdo Alejandro Jodorowsky, with gorgeous art by Juan Giménez.  The other was Hellboy: The Conqueror Worm by Mike Mignola.  I was thunderstruck.

I was very vaguely aware of Hellboy.  He was some big, blocky red guy with goggles on his head (right?).  I didn’t get it.  The art style wasn’t my thing.  I hadn’t given it much thought.  But here I was, reading a Hellboy trade, and it was like someone had a list and was just checking off boxes.  Lovecraftian monsters?  Check.  European folklore?  Check.  World War II?  Check.  Mad scientists?  Check.  A monkey with a handgun?  You know it.  Talking brains in jars, secret societies, hints of deep histories, the list goes on and on.  This Mike Mignola fella had written a comic with all the things I wanted to read.  And, as I read it, the art became more and more a part of the whole, until I was as transported by the images as by the ideas.  If you asked me to describe what style of comic art I like, it would be nothing like what Mignola draws.  Yet, it is perfect.

Nearly twenty years later, several nice collectible hardcovers, the highs and lows of the two feature films, the spin-off of B.P.R.D. and some other stuff I haven’t read yet, have all come and some have gone.  I sat down to Hellboy in Hell.  This is it.  To the best of my understanding, this is the end.  Mignola has been stepping slowly away from his creations for a long time.  I don’t know if he’s sliding into retirement, or just exploring other ideas.  But he seems to have been drifting away from comics, and there’s been a sense that Hellboy was heading toward his final curtain.  Not death.  That already happened.  More than death.  A final revelation.  The Beast of the Apocalypse would have his personal apocalypse.

Though the ending did not have the emotional gut-punch that the end of Y: The Last Man did, it was still emotionally tough.  For quite some time, maybe even from the beginning, Hellboy has been a comic of deep melancholy.  It’s funny, sometimes in a grim way.  It’s full of cool ideas, weird action, and interesting references.  But it’s also very, very sad, almost aimlessly nostalgic, and wistful.  That all comes to the fore in this volume.  You would think the foretold collapse of Hell and the final battle of the demonic hordes would be a cacophonic explosion of action.  Yet here, it is a slow, often off-stage petering out of energies.  Quiet in its inevitability.

I can’t sing the praises of Hellboy loudly enough.  It’s one of the best comics I’ve read.  It taps into so many things a challenges you in so many ways.  Like when I watch Twin Peaks, reading Hellboy makes me feel like I’m going home.  Not to any place I ever lived, but to that place I always belonged.  Was Hellboy in Hell the end?  Maybe.  Probably.  It’s a fitting conclusion, whatever comes.

If you like what I do, you can buy me a coffee. Check out my Facebook, Twitter, or Goodreads.  And take a look at my Patreon page, where I’m working on a novel and developing a tabletop RPG setting. You can also read my fiction over on Amazon.