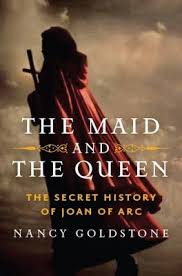 As a kid, the story of Joan of Arc fascinated me.  So much great imagery swirls around her legend, so much mystery and power.  What then is the reality? Nancy Goldstone explores the world that created Joan and the legacy of the Maid of Orleans in this quick read.  However, if you’re looking for a biography of Joan, you may be in the wrong place. Though she is an important element, the book explores the interactions and conflicts of many people, and the woman who dominates the narrative isn’t the legendary warrior girl, but Yolande of Aragon, Queen of Sicily.

Henry V was the play that saved Shakespeare for me.  After my high school English teacher did her best to make Shakespeare (and Dickens, and several other classic authors) into a completely unapproachable and uninteresting writer, Kenneth Branagh’s adaptation made me realize there was more to the Bard than I’d seen.  Though I loved the story of Henry V, and had a long fascination with Joan, my Medieval European history has always been spotty (at best), and I really didn’t realize how connected the two were, how Henry V’s invasion of France was part of what made the Maid who she was.  And behind the scenes, brokering power and shaping France by what seems like will alone, was Yolande. Having watched Game of Thrones, I can’t help but imagine Yolande as Diana Rigg’s Olenna Tyrell, though with more ultimate success.

The book is filled with colorful characters and harrowing events.  Mad men, villains, true believers, bandits, heroes, opportunists, and more.  Joan, for all her compelling mythology, is just one chess piece in an epic chess match.  There are so many people I want to learn more about, so many conflicts and places that should be explored.

The early part of the book is a bit muddied.  As Goldstone sets the stage and introduces many of the early players, it becomes a touch difficult to follow who’s who.  However, once the history begins to unfold, it becomes much more clear. It is very much worth the effort and worth the read.  You’ll come out of this book with a better sense of a moment in history, the place of legends, and with an appreciation of a powerful woman worth remembering.