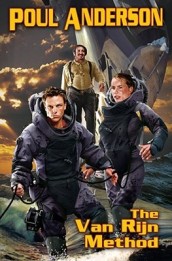 Poul Anderson is one of those titans of Golden Age Science Fiction.  His massive Technic Civilization universe covers a whole bunch of novels, novellas, and short stories.  Seven omnibi worth. The Van Rijn Method is the first collection, putting stories into their chronological order, as opposed to the order in which he wrote or published them.  The stories hang on the border of Space Opera and Hard Science Fiction. Star empires and colorful characters live and adventure in a world of well thought out, and fairly scientifically accurate environments.  It’s an interesting balance. My one issue is that Anderson’s Libertarianism starts roving into Ayn Rand territory. Van Rijn is a boarish a-hole, but everyone should just listen to him, because…well, because he’s right…because…well…Shut up!  And while never quite saying as much, the system Van Rijn represents relies on, if not slavery, serfdom, where most people are system-enforced labor, supporting a wealthy elite (but of course, that all happens ‘off camera’).

If ever there were books to serve as inspiration for a Traveller game, this would be it.  Merchants explore the cosmos, forging trade routes across the stars, finding and exploiting new cultures and new civilizations.  Unfortunately, it also features plenty of that old school chauvinism and no small dose of imperialist nostalgia.

Sci-fi buffs should definitely give this a read.  It’s obvious that Anderson was profoundly influential on later writers and game designers.  And he’s crafted a really interesting future-history, which I’ll be exploring over the next several years, no doubt.  Seven volumes, after all. It’s not as light hearted and fun as I usually like my Golden Age Science Fiction, but it’s interesting, for sure.

One thought on “Book Review: The Van Rijn Method”