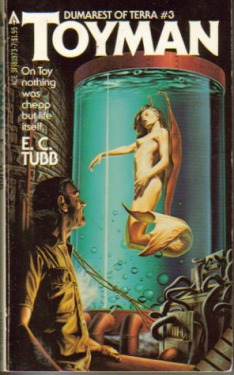 There are 33 Dumarest of Terra books.  Thirty three. Unfortunately, they’ve become kinda hard to come by these days, though I think maybe they’re available as e-books.  My dad talked these up to me a lot when I was younger, and they always bounced around on my ‘to read’ list, but I guess I never bought any of them.  Then one day, working at a bookstore, I saw Dumareast of Terra Omnibus 1 roll by, and picked it up.  Alas, there doesn’t appear to have ever been an Omnibus 2.

Toyman is the third novel collected in the book, and it finds our hero getting caught and enslaved on the nasty little planet Toy.  With a cruel power-elite hoarding all the money and slaves doing all the work, it has some familiar echoes. Dumarest is a tough dude, and fast.  So he makes a name for himself and gets into some area fights. In that sense, it hits a lot of tried and true Sci-Fi/Fantasy/Adventure tropes, but Tubb manages to make the familiar new.  There are some nice twists and turns, a few good supporting characters, and a lot of good action.

Here’s the thing about Tubb’s Dumarest books.  They’re short and they’re super fast paced. They’re kinda of a throwback to the Pulps of a few decades earlier.  Science Fiction in the late 60s was still mostly a literary ghetto, but Tubb elevates what could be a Mack Bolan in Space!!! into something better.  Like Andre Norton’s work, these books feel like they take place in a fully realized universe that exists and functions outside of the experience of the protagonist.  It feels like a living world that Dumarest inhabits.

As much as I don’t want to, I think I’ll eventually have to break down and start getting e-book versions of these novels, ‘cause I’m going to have to read them all.  If you’re looking for something fast and light, but well written and engaging, hunt down some of E.C. Tubb’s Dumarest books. Though there is an overarching thread of a storyline, to the best of my knowledge most, if not all, of the books can be read and enjoyed on their own.

One thought on “Book Review: Toyman”