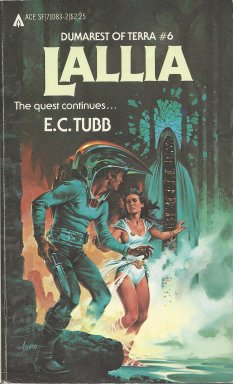 My favorite Dumarest of Terra novel so far, Lallia shakes things up a bit for our hero.  In the previous novels, Dumarest is typically on a planet, looking to get off said planet, gets mixed up in some trouble, and eventually solves the problem and gets off the planet.  This time around, he’s off planet in the first chapter or so.

I really enjoyed the vibe of this story.  Dumarest signs on with a nasty, broken down little ship, crewed by nasty, broken down people.  They’re riding hard, barely keeping things together, trying to make a good enough score to keep going.  It’s a bit like the crew of the Serenity, if they were all hopeless losers. The captain is consumed by fear and hopelessness, the engineer is a dangerous drunk, the navigator is a spaced-out seeker, and the steward is a dumbass kid in over his head.  Along the way, they have various adventures and pick up a few passengers, making for a motley bunch of ragged travelers.

The story features several worlds, often in snapshot as they land, do a few things, and take off again.  The ship is traveling around the Web, a bundle of star systems all fairly close together but cut off from a lot of more resource rich regions of space.  The worlds are poor and desperate and rough. It’s a great place to get lost, to lose yourself, and maybe (Dumareset hopes) to find something old and forgotten.

The weakest part of the book is probably the titular Lallia.  She’s a character with potential, but I don’t think it’s really realized in the novel as much as it might have been.  Tubb sets her up as almost a female version of Dumarest, a match and equal. Yet, her actions within the story make me question how she’s survived this long.  In spite of being around the block more than once, she still seems unable to keep her head, keep her mouth shut, and generally play it cool; all things you need to do when you roll with Dumarest (or ply the space ways solo, as she’s apparently been doing).  Again, drawing a comparison to Firefly, Lallia seems like she’s going to be something like Saffron, yet while she has the guile but lacks the competence.

Six books in, and I’m really enjoying this series.  They’re fast reads, yet well plotted with plenty of colorful supporting characters and memorable moments.  E.C. Tubb’s world building is excellent. This universe feels alive and lived in. It’s obvious that there are larger things at stake and that forces are in motion beyond Dumarest’s circle of influence.

One thought on “Book Review: Lallia”