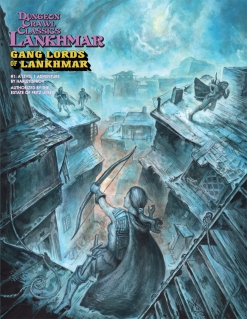 Another adventure for Dungeon Crawl Classics Lankhmar, this time things get a lot more complicated.  Intended for first level characters, there’s definitely opportunity for some combat encounters, but there’s a lot of opportunity for roleplaying.  Depending on how things play out, the PCs could come out of this with some useful, long term resources.

The set-up is fairly simple.  A gang lord wants help securing his territory against two other gangs, so he hires the PCs to be his muscle.  There’s a bit of “Yojimbo”/”A Fistful of Dollars” to the story, with the other gangs trying to buy off the PCs, various betrayals, etc.  There are also a bunch of colorful characters, some of whom might make for good contacts if they survive the events of this adventure.

This one is set up a bit different from some others as the timeline of events is a little more important than the locations of those events.  There’s a ticking clock of sorts. Events will happen if they’re not altered by PC actions. However, PC actions can themselves ramp up the tensions in the neighborhood, causing additional complications.  There’s a lot to balance, both as a Judge and a player.

Maybe even more than Masks of Lankhmar, this adventure gives the PCs the opportunity to set themselves up as part of the underworld power structure in Lankhmar.  It would not be unreasonable for them to finish this story with a new base of operations and one or two ally gangs…or enemy gangs.

In order to help build immersion for players and give the feeling that Lankhmar is a living city, I might introduce the sad bar The Dogfish into a game before the events of this adventure.  Maybe have the PCs meet someone there in another adventure. That way when they get involved in this adventure, there will be the ring of something familiar. Another option might be to tie a character’s back story to the Old Slave Barracks.  Perhaps one of the PCs did some time as a pit fighter there. Yet another option might be to draw some kind of connection between the Shrine of the Rat God that appears in these pages with the rats from Lankhmar Below that appear in No Small Crimes in Lankhmar (from the Lankhmar boxed set).  While these connections aren’t necessary, I think they might help flesh out the world for the PCs and remind them that actions have consequences and nothing they do (or do not do) happens in a vacuum.

I think this one will be a challenge to run because there are so many moving pieces and so many ways things might progress.  It also might shift the direction a campaign in going in, which is always as scary as it is exciting. That said, I think this one has a lot of potential.