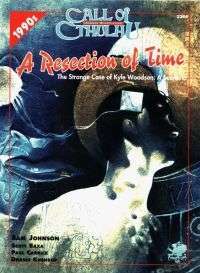 This is either twice as much as it should be, or half as much.  It’s another Cthulhu Now, 1990s-set scenario for Call of Cthulhu that doesn’t feel at all like it takes place in the 1990s.  Intended for play in two sessions, there is a warning that it could take longer, and if you play out everything in the scenario, I have to assume it would take closer to four.  There are some really fantastic ideas, but they are also left largely unexplored.

Considering the scenario takes place in San Francisco, Los Angeles, Arkham, and Belize and deals with two powerful and strange Mythos related threats AND a previous expedition that will function almost as a flashback…It’s just a lot to cram into a short time.  Yet, as much as it is, I couldn’t help but feel that there needed to be a heck of a lot more about both the Brothers of the Yellow Sign and about the Mi-Go and their activities.  There are references to immortal, blue skinned people who live underground, to deep ones, to some crazy stuff going on in the ancient history of Mesoamerica, and to a group of Shub-Niggurath worshiping, degenerate Mennonites, but it all just kinda flies at you.  Each one of those things could use an adventure or two to introduce.  If I were running this as part of an ongoing game, I think I’d have to use the Brothers of the Yellow Sign and the pawns of the Mi-Go as petty enemies beforehand so when they show up it isn’t so out of the blue.  If I were running this as a convention game, as it seems to have been designed, I’d probably just drop everything about the Brothers of the Yellow Sign.  They seem out of place and they just muddy the water as it stands.  Also, I have no idea why they’re called the Brothers of the Yellow Sign, as that name is not explained and I have no idea what connection they have to Hastur, the King in Yellow, or the Yellow Sign.  The blue skinned immortals?  Are they connected?  I don’t know, because they’re not explained in any way.

Though in reality, breakthroughs in the study of the Mayans that allow things to happen in this scenario don’t happen until much later, I really think this scenario would work better being set in the 1920s.  Fudging some of the academic history wouldn’t take that much work, especially if you work into it some kind of wunderkind linguist and then kill him/her off.  Up the travel times and twist a few things and it’ll work.  Making it feel modern might take even more work.  Like many of the 1990s scenarios I’ve seen, it does very little to make it feel contemporary (to the ‘90s).  Nothing of the culture or even much in the way of current technology.  Not even a mention of the internet, which might not have been as ubiquitous as it is today, but was still a major force by the mid ‘90s.

If you have a regular game with recurring characters, set in the 1920s, this one might be worth doing the work to weave in.  I was thinking it might be cool to work in as a precursor to Masks of Nyarlathotep.  It could be a companion story to the Peru chapter, with expeditions to Central and South America sharing some team members and sponsors.  The San Francisco and Los Angeles stuff could be removed or reworked to happen in New England so things are less confused.  In doing this, the Brothers of the Yellow Sign could get worked into further stories and perhaps replace one of the factions in Masks of Nyarlathotep, barring that, you could replace them in this scenario with one of the factions from Masks.

Alternately, I think this might work being mixed into an ongoing Delta Green campaign.  The Mi-Go especially could play into that game.  If you’re already deep in Delta Green, you’ve probably already got plenty of material to make the events of this scenario feel more modern.

As is, it suffers from the problems I often find in Chaosium’s published adventures.  Too much and too little at the same time.  There’s enough in it that a Keeper could certainly mine some excellent ideas.  Without a lot of work on a Keeper’s part, though, I don’t see how it would be much fun to run.

2 thoughts on “Tabletop RPG Review: A Resection of Time”