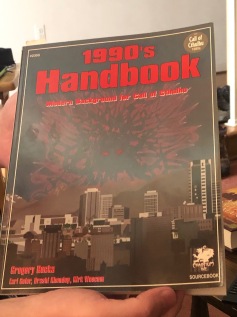 In my previous reviews of the Cthulhu Now supplements Secrets, A Resection of Time, and At Your Door, I’ve probably made it clear that I don’t actually have any interest in running a game set in the 1990s.  People who know me know that I genuinely hate the 90s.  I hated them when I was living through them and I hate them today.  The music, the fashion, the movies, the art, the general culture, etc.  Obviously, there are exceptions, but I firmly consider the 1990s to be the worst decade of the 20th Century.  I’m talking taste here.  I don’t mean objectively.  It’s not my thing and I have no nostalgia for it.  Part of why I’ve recently been reading the Cthulhu Now books I own is because I’m contemplating trimming my tabletop RPG collection a bit and I’m judging some things I’m less interested in keeping.  That brings me to 1990s Handbook, written by among others Greg Rucka (yeah, that Greg Rucka), the general background book for the decade.

Written in 1995, this book is a snapshot of the times.  It’s a short book, so it’s hardly comprehensive.  It doesn’t get into pop culture or the various ‘scenes’ or politics.  It maybe spends a bit too much time on weapons and technology.  But it also gets into the relationship between government and the people, into law enforcement agencies and militaries.  There’s a fairly extensive write-up on major factions of organized crime, perhaps because in the years after the (supposed) end of the Cold War, organized crime looked like it might be the new boogieman.  There is mention of the growing threat of terrorism, yet in the years before the World Trade Center attacks, it was hardly a dominant topic.  One of the more interesting aspects of the book is what’s missing.  1995 was a time just on the cusp of the world-changing conjunction of the internet and the cell phone.  Sure, personal computers and the internet were a thing…kinda.  Sure, mobile phones existed, but they were used to make phone calls.  It’s sometimes difficult even for a technophobe like myself to remember that a LOT has changed in a relatively short amount of time, just because of those two individual technologies.

There’s a brief set of rules for using hit locations.  I tend to run a very streamlined combat when I run Call of Cthulhu, so adding hit locations isn’t something I’m interested in, but I see the appeal.

Lastly, there’s the best part of the book, a chapter on story seeds.  Like At Your Door, these actually feel like they’re for a contemporary game.  They don’t feel like something from the 1920s with the serial numbers filed off.  From HIV and moviemaking, to bio-tech and millennial cults, the seeds give you some great ideas for mixing the Mythos into our times, or at least the 1990s.

If I were ever going to run a 1990s set Call of Cthulhu game (I’m not), this would be a handy asset.  I could also see it being a useful companion, especially the story seeds, to a Delta Green game.