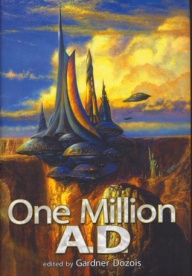 Why settle for a bunch of near-future stories where today’s issues are stretched just a bit, and most things are totally recognizable?  Let’s get serious and take a look at the far, far distant future.  Even beyond the reach of books like Dune or Foundation, One Million A.D. takes us on six trips into the almost unrecognizable future.

Good Mountain by Robert Reed may be the most genuinely weird tale here.  People are riding in giant worms, fleeing some kind of disaster, searching for somewhere safe.  As the story progresses, you get more and more sense of the world, but as each mystery is unraveled, things get stranger.  And in the end, what do you know?  I’m not sure.  I liked this one a lot, and I think it got me in a good headspace for the rest of the volume.

A Piece of the Great World was a treat for me.  I didn’t realize that this Robert Silverberg story was going to be a follow-up to his New Springtime books.  I re-read At Winter’s End last year, and loved it all over again.  And though I haven’t read A New Springtime yet, I really enjoyed this story, set many centuries after the events of those two books, when the characters have faded into near myth, similar to the American Founding Fathers, or British Kings and Queens of the Middle Ages.

Mirror Image by Nancy Kress is the first Transhumanist story in the volume.  It goes to some very weird places, with some interesting moral quandaries.  And the eventual revelations are pretty brain breaking.  Good stuff.

Thousandth Night by Alastair Reynolds gets into some more crazy Transhumanism, getting into some interesting politics of an ultra-distant future, some cool conspiracy stuff, and some wild ideas.  It’s also just a cool who-done-it, sort of a Far Future Agatha Christie tale.

In spite of a very weird tense issue (I’m not a fan of ‘clever’ uses of tense, preferring either third-person past or first person past), Missile Gap by Charles Stross is pretty good.  And like Good Mountain, this story is super, super weird, getting weirder the more of the setting is revealed.  The Cold War has been carried into the ultra-far future, where it’s been allowed to continue…sort of.  And that’s just the beginning.

Riding the Crocodile by Greg Egan finishes off the collection, and is the third story to delve into Transhumanism.  The two protagonists are essentially gods, having transcended most of the limitations of Humanity.  They think and act on a cosmic scale.  But they’ve grown tired of their lives, and want nothing more than to do one last meaningful thing before the end.  That’s a pretty good set up.  And what happens is really odd.  Definitely some food for thought.

One Million A.D. is a must.  Gardner Dozois has collected six novellas that are very good, and worthy of tracking down.  Science Fiction fans should absolutely read this.  The authors have all done a great job of pushing limits and boundaries, of looking at worlds way beyond our ken.  Yet all are quite readable and enjoyable…even relatable in their way.